Virtual Reality will completely alter the way we see, think and interact with the world. Goldman Sachs predicts that VR headsets have the potential to replace smartphones and personal computers as the tool of choice for interfacing with technology. (1) As with all disruptive technology, VR presents businesses innovative ways for engaging with audiences. In the coming years it is expected to have further real world applications in a wide range of industries, leading many companies to take an interest in it.

So why is there so much hype about this new technology? To put it simply, people enjoy VR experiences. They are more emotionally engaging than normal videos (4) and after trying a VR experience people often describe it using words like ‘cool’, ‘like’, ‘awesome’, ‘excited’ & ‘fun’. Additionally, people are highly likely to tell their friends about VR experiences and go on to seek out more VR in the future. Even among those who haven’t tried VR, most are interested and feel positively towards VR experiences. (5) VR is also excellent for building consumer sentiment: using VR builds a positive view of a brand, as well as making it seem innovative. (6) 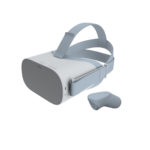